Today I feel like Alexander and the Terrible, Horrible, No Good, Very Bad Day.
& it’s only 12pm.
On Tuesday, I decided to be Miss Frugalista and take Indy to a grooming school near our home. I should have seen the red flags when the girl couldn’t do basic math. But silly me, I always give everyone the benefit of the doubt and thought, Well I’m sure she’ll take good care of my puppy because she’s fresh and eager to do well, right?
Wrong. She nipped my poor baby!! They “glued” the cut together & the girl was crying–she felt so bad.
Flash forward to this morning, & what do ya know? It’s infected.
{insert angry katie face here}
So now I’m trying to figure out what to do because:
1. We don’t have a vet yet since we moved.
2. Blake worked his first 27-hour shift at the hospital, with only two hours of sleep &
3. Emmy is screaming to be fed.
I really didn’t want B to take Indy to get checked out because he had been working so many hours and I just wanted him to sleep. But, he suggested he go because he’s better at being stern and laying down the law!
{my words, not his}
So off he went with Indy….
Meanwhile, I switched over the laundry {because i didn’t want to leave it in there wet for a week like i did last time… yea, ew…} Emmy was quite content in  her high chair so I didn’t disrupt her. When I went to unbuckle her, guess what little fragrant surprise I found?
yep.
blow-out all over the high chair !!!
Instead of getting all frustrated, I’m taking a step back, breathing, venting to you, moving to Austrailia, & will return to the poop momentarily.
I think I’ve had my share of eventfulness today, what do ya think?
OH!! & guess who’s 7 MONTHS today?!?!???? 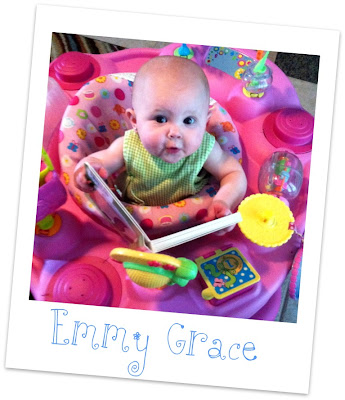 ^^ if you said her, you’re right 😉 ^^
Come back later today–or tomorrow, or in five years when I post her 7-month stats!
Anyone wanna move to Australia with me??
loyally,
katie