Every year, my favorite “happiness guru” Gretchen Rubin puts out a list of things she wants to accomplish throughout the year.

The fun part is there are no limitations and you can include anything on your list.

1. See Gretchen Rubin speak in San Diego (& get a picture)

2. Write *something* every day

3. Move to the east coast (this summer!)

4. Go on a weekend getaway with my husband (no kids!)

5. Create and stick to a budget

8. Create photo books from each location we’ve lived in

9. Send out a “Love Letter” (my blog’s newsletter) once a month

10. FaceTime (grand)parents once a week

16. Pick up my grandmother’s piano from West Virginia

17. Embrace the adventure of driving across the country with three kids and a dog

18. Learn more about and/or practice (any type of) mindfulness once a week

19. Stay current on events happening around the world

It’s not too late to create a list of your own. If you do, please share–I’d love to cheer you on!

Throughout the years, my father has taught me many valuable things, whether purposefully or inadvertently. In honor of November being the month to raise awareness of men’s health issues, I’d like to share just a few with you:
Always write a “Thank You” note.
Or even better, call them on the phone. When I was younger, I dreaded calling people on the phone to thank them for a gift they sent—especially to people like my dad’s-great-aunt’s-sister-twice-removed-whom-I’ve-never-met. But now, I see the importance my dad was imbedding in me. I always write a thank you note, and if for some reason you didn’t get one, then it got lost in the mail.
Use a person’s name.
Whether it’s the cashier at Target or a server at a restaurant—if you can see the person’s nametag, use it. Say, “Have a great day, Erica,” when dropping change off at the tollbooth. It takes no effort on your part to add in an extra syllable or two, but it goes a long way to the person working tirelessly on the other side of the counter.
Tip or pay employees bonuses for special occasions.
If you want someone to like working for you, and want to continue working for you, give him or her an incentive.
Be financially sound.
My dad lost his father when he was only nineteen, so my dad has always had a plan. He has it down to a “T,” what he wants and where his money will go, when the time comes. He has even gone so far as to open up a savings account for his granddaughters, which my husband and I cannot be more appreciative for.
Don’t sweat the small stuff.
This one is a little backward because my dad totally sweats the small stuff! I think the phrase “cry over spilled milk” was invented after him. While I’ve never actually seen him cry over spilled milk, I have heard him throw out a few fancy four-letter words on many occasions. Whenever I see (or hear) my dad begin to get stressed about something I consider small, I try to lighten the situation by facetiously saying something like, “Oh no! It’s the end of the world! There’s no more cereal? Whatever will we do?! How will we ever survive?!” It usually breaks up his “fit” and puts a smile on his face. And lowers his blood pressure.
Do what you like, and like what you do.
My dad’s hobby throughout the majority of his life has been the Ham Radio. It’s a hobby he doesn’t share with my mom, but that’s okay. I didn’t realize it until much later in life, but we don’t always have to share the same hobbies or interests as our spouse. It’s okay do have something only you like to do. In fact, it’s nice to have something just for yourself.
Love, unconditionally.
When my husband (then boyfriend) and I announced to my parents I was pregnant, I swear my dad’s face turned a shade of green only seen in the Amazon. I don’t know what went through his mind at the time, nor do I really need to know. It was a difficult and testing time in our lives, but my dad never once said anything appalling to my husband or me. He loved me unconditionally. My Jewish father walked me down the aisle of a Catholic church to marry the love of my life. That gesture right there meant the world to me and showed me that you love your kids unconditionally. 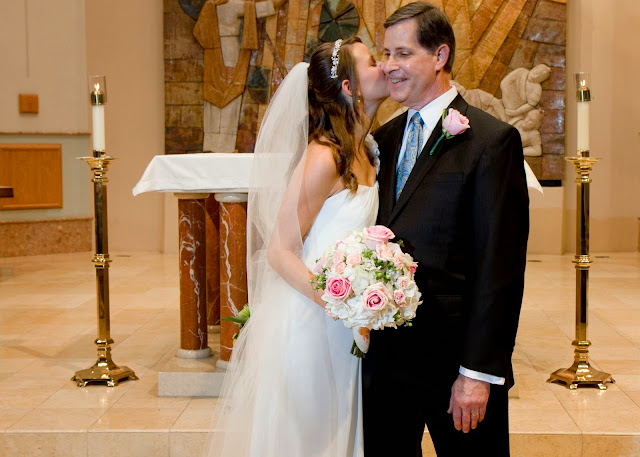 My father is a great man. He is wise, selfless, hard working, goofy, and loyal.
He’s my hero.
I love you, Daddy.
loyally,
katie